The Internet Casino Slot Machine Lucky 88 found at Bet365 Online Casino is rich in terms of Chinese Culture even if it is not so rich in payouts. The premise of the game is based around the aspect of the number 8 being viewed as the symbol for prosperity in the Chinese Culture. Because of this you will find all the payouts being in some format of eight or ending in 8. The symbols creating 88 refer to double prosperity and the symbol 888, representing the largest payout on this Internet Slot machine being 888 times your wager.

This machine is amongst the non-progressive family of slots at Bet365 Casino and although the payout odds are not as high as some the features are fairly extensive. It is a five reel machine with twenty five payout lines. The minimum wager per line is 3 cents and the maximum is four dollars. Based on the maximum wager of $4.00 your potential payout is $3,552.00 based on the largest payout per coin being 888x your bet. 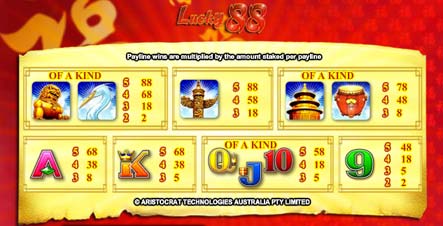 The symbols on this internet slot machine include: a tradition Guardian Lion, also known as a “Foo Dog”. Other standard reel figures are the White Chinese Swan Goose, a Chinese Temple, a traditional Chinese Drum and the famous Totem Pole found in Tiananmen Square near to the Forbidden City. Along with all these symbols are the playing cards from the nine through to Ace.

A Paper Lantern is used as a Scatter Symbol to activate the Bonus Features when three are displayed and provide a payout multiplier when two or more show up. An animated Chinese Priest makes up for symbol number 13 on this game and number I find ironic considering the theme. The Priest is the wild card symbol and substitutes for everything except the Scatter Symbols. Having all thirteen symbols available on all reels dramatically reduces your odds of winning or hitting the Bonus Rounds. This was quite evident during my play.

Bonus Round and Other Features

The bonus round is nothing special and during my one hour review was fairly elusive, only showing itself once. I used the feature entitled extra choice but could not see the benefit even though the game information said there is one. If the three Scatter Lanterns show up anywhere on the play board during a spin it triggers the Bonus Round allowing you to pick from different spin and Bonus Multiplier amounts. By the time this happened for me I was bored and did not pay much attention.

This machine like all others at Online Casino Bet365 have the gamble feature allowing you to increase any win by 2x or 4x but I was not even interested in this because my $200.00 was disappearing so quickly.

For me, maybe it was just not my day, this Machine was not lucky for me. I found the theme an interesting lesson in culture but overall unexciting to play. For the first time in my reviews I lost all of my starting $200.00 and even had to reduce my betting amount from 50 cents per line to enable me to get a bonus spin.

If you do decide to try this internet slot machine, I sure hope lucky 88 works some magic for you. And, don’t forget if you are playing from the Unites States login to Strong VPN to allow you to play using real cash.